Cool kids pop a programmer's calc in their demos

Over time, I've heard several well-respected security professionals mention that you're not really cool unless you can pop a scientific/programmer's calculator when demoing your exploits. I mean, what right does a standard, run of the mill calculator have showing its face to a crowd of enthralled conference attendees watching the latest version of Windows 7 get totally pwned? And how many self-respecting security folks use a standard calc more than the programmer's calc? So rather than waste the time of the people who thought this would be cool, I thought it would be better to waste my own time to complete this silly challenge. So without further ado, prepare to do some hexadecimal math. I'd like to mention that Jacob Appelbaum (@ioerror) and Aaron Portnoy (@aaronportnoy) inspired me to write this. ;D
To start, I used procmon to observe how calc was interacting with the OS when switching from standard to programmer's mode.

It turns out that it modifies the following registry key: HKCU\Software\Microsoft\Calc\layout and changes the REG_DWORD value to 0x00000002 when switching to a programmer's calc.
One of the nice features of procmon is that it lets you view the stack trace of each entry. Here's the stack trace for the call to RegSetValue: 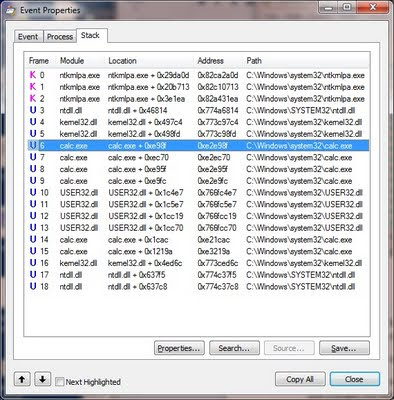 So, to get my shellcode to work, I'll likely need to understand how calc.exe modifies the registry. After loading calc.exe into IDA, I quickly determined that it calls the folowing functions, which procmon graciously gave me the offsets to:

IDA in conjunction with my debugger conveniently gave me all the parameters I needed to pass to these functions. For more information on the function parameters, refer to MSDN documentation.
The only problem is that the shellcode needs to first determine the addresses to these functions, which turns out to be the bulk of my shellcode. I should be careful when saying 'my' shellcode considering I modified SkyLined's awesome w32-exec-calc-shellcode[1] which I believe was loosely based upon Matt Miller's paper - "Understanding Windows Shellcode[2]."
It's worth noting that if your shellcode is running in the stack, careful considerations must be made when writing your assembly. Specifically, the shellcode instructions and function parameters share the same space. Because you are executing code from the stack, you have to be careful not to clobber your instructions. So what I did was move esp (which would point to the first instruction) into ebp [MOV EBP, ESP] and essentially create my own stack frame above the code.
Here is the shellcode with relevant comments for your convenience. Note that this will only work on 32-bit Windows and it has only been tested on Windows 7 SP1 :
w32-programmer-calc hex
w32-programmer-calc assembly


Please comment, try it out on your 32-bit Windows 7 machine for yourself, and let me know if it doesn't work and I might make an effort to fix it. Enjoy!
References: