Recently, I've been looking into the exploitation of use-after-free vulnerabilities. This class of bug is very application specific, but armed with just the right amount of knowledge these vulnerabilities can be exploited to bypass most modern OS exploit mitigations. After reading Nephi Johnson's (@d0c_s4vage) excellent article[1] on exploiting an IE use-after-free vulnerability, I decided to ride his coattails and show the steps I used to analyze his proof-of-concept crash code.

As shown in his blog post, here is Nephi's test case that crashes IE:
Internet Explorer crashes at mshtml!CElement::Doc+0x2

What we need to find out is what type of object was freed and how many bytes get allocated for that object. That way, we can craft fake objects of that size (using javascript) whose vftable at offset 0x70 point to our shellcode.

According to the disassembly (for CObjectElement::CObjectElement), the actual size of the class is 0xDC. However, 0xE0 is allocated on the heap because the compiler rounded up the size to the nearest DWORD boundary. 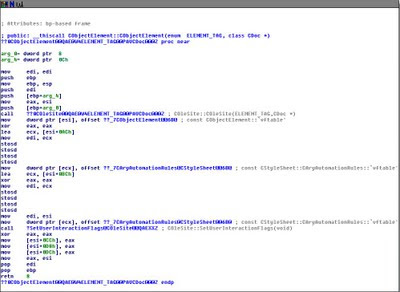 So to refresh our memories, what was needed to begin exploiting a use-after-free bug?

There is no magic command that will give you this information and as usual, there is always more than one way to obtain this information. The key is to understand what lead to the crash. The next step is to utilize javascript to declare string variables that will allocate fake objects in the heap that point to attacker controlled shellcode (via heap spraying). This can be accomplished reliably without needing to point to a typical address like 0x0C0C0C0C which serves as both an address in the heap and a NOP slide. More on that in a future blog post...