I just added Get-ILDisassembly to the PowerSploit project. This tool takes any MethodInfo object and returns the disassembly for that method, assuming it's not a native method or implemented via P/Invoke.
Get-ILDisassembly relies upon the fact that you can dump a raw byte array of a method's IL using the GetILAsByteArray method of the System.Reflection.MethodBody class.
MSIL is surprising easy to disassemble. It consists of either one or two-byte opcodes followed by an operand in many cases. Operands typically consist of one of three options:
1) An immediate value
2) A 32-bit metadata token which is used to describe a member of an object. The metadata token is then resolved with the ResolveMember or ResolveString methods in the System.Reflection.Module class.
3) A location to branch to in conditional logic
Each MSIL opcode is also described in detail in the System.Reflection.Emit.OpCodes class. Unfortunately, there is no direct way to resolve an opcode from a raw byte. In my function, I simply generate a hashtable that links a byte value to its respective MSIL opcode.
Here are some examples of how you could use Get-ILDisassembly:
In the example above, I'm simply dumping the disassembly of the System.Int32.Parse(String) method.
In this example, I disassemble the System.Array.BinarySearch(Array, Object) method.


Lastly, as I hinted upon on Twitter, you could certainly get creative with Get-ILDisassembly. I used it to calculate the frequency of all opcodes in every exported member of every loaded module in PowerShell using the following commands (caution: this takes a long time to run):
The result of this command will resemble the following: 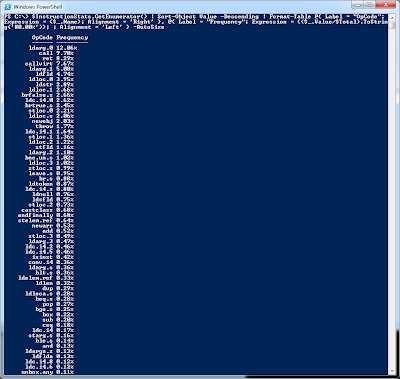 Lastly, I would be a charlatan without mentioning that the disassembly techniques I used came straight out of the book "C# 4.0 in a Nutshell" and was used with generous permission from O'Reilly Media and the authors, Joseph Albahari and Ben Albahari. Enjoy!
Labels: .NET, MSIL, powershell, reflection, reverse engineering